8 things to do in Christchurch with your kids 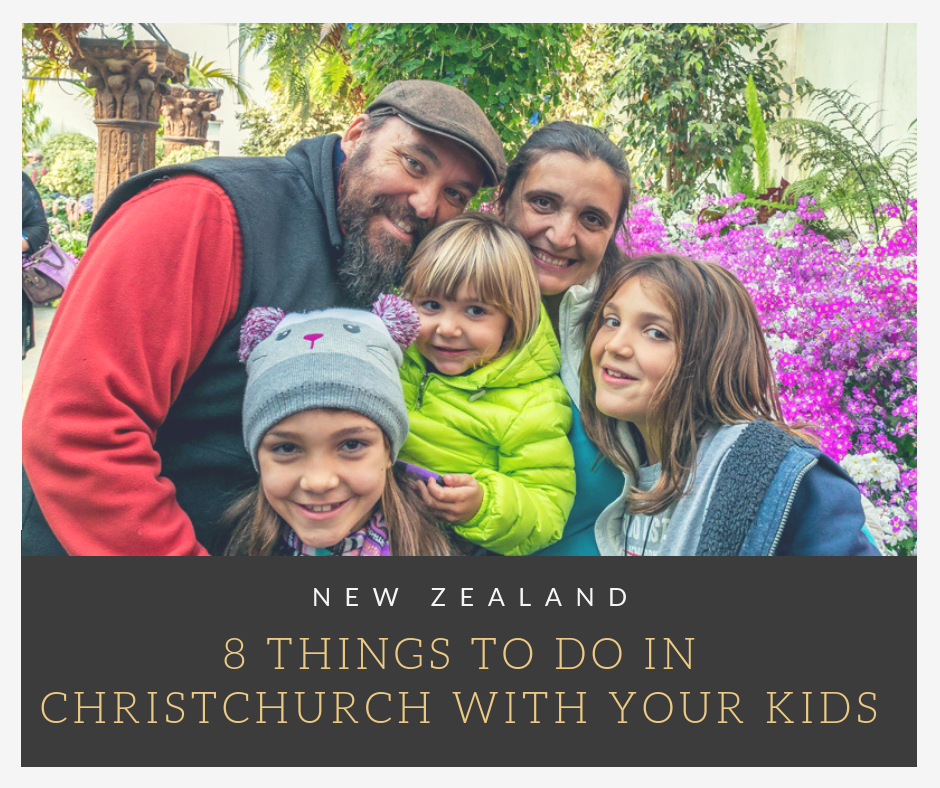 New Zealand has been Mass’s and my dream for a decade!

We were set to come here for our honeymoon in 2009, but life has a way of changing your plans and so we always promised ourselves that we absolutely were going to get here someday. We did, thanks to our world tour with the family!

Although we were sad for leaving Australia after 2 long months, we were also thrilled to finally have the chance to explore this country we had dreamed of for so long.

We arrived in the middle of the night (apparently we have very late night arrivals everywhere we fly to!) at Christchurch on the South Island. We booked  a hotel in the downtown area because we wanted the freedom to move around as much as possible by foot. Believe me Christchurch, also know as the Garden city has plenty to offer to fill your days!

We were staying right across the street from this lovely street. It was opened in 1932 as a pedestrian mall. The buildings are in a beautiful Spanish Mission architectural style and painted in a distinctive pastel colour scheme.

You will find a variety of shops from gourmet fudge and cookies, a whisky bar, cafes, restaurants and a diamond jeweler. If you are lucky you will also see the the traditional tram go by! 2. Take a tour of the city on the traditional Christchurch tram

One of the best ways to visit the downtown area of Christchurch in an entertaining way for your kids is by riding the traditional Christchurch tram. The ride takes  about 50 minutes with 17 stops along the way where you can hop on and off. It was really helpful for us to have a better understating of where everything was, in order to decide where we actually wanted to get down so our kids didn’t have to walk everywhere. I’m sure we all know what kids like to say after walking for 10 minutes “are we there yet?”. The tram kept mine entertained for a while because it was a different way of getting around, plus the drivers were pretty funny so it was also interesting to listen to them talk about the history of this city. In case you want to do a couple of the activities offered here in Christchurch, they offer better prices if you buy them together as a package. We booked 4 activities, including the tram (which was also convenient to get us places!). For more information on packages and prices click here. 3. Go punting on the Avon

This is one of Chrustchurche’s iconic attractions.

Personally this reminded us of the traditional gondola in Venice! We were lucky because we were the only ones on the boat for the time we scheduled.

They gave us a hot water bag each and blankets since it was still a bit chilly. Once we were ready a Punter dressed in Edwardian fashion (striped blazer and braces, with a ‘boater’ straw hat), stood on the platform at the end of the boat and propelled it along with a long pole, slowly down the river. He talked about the plants and birds that populate the area of the Botanic Garden that we were going through and then let us enjoy the moment till we got back. This tradition was introduced in 1986, young lovers, long-married couples, families, friends and individuals have always enjoyed this attraction any time of the year.

For more information on packages and prices click here. 4. Take a tour of the Botanic Gardens

Our activity package for touring the city included also a guided tour of the Botanic Gardens, but you could walk all around them and enjoy it as well.

The tour was an hour long on an electronically powered vehicle with a very prepared guide who gave us a lot of insight on this beautiful garden. He pointed out trees and plants that were not originally from New Zealand but that were put in the Garden for their beauty and to create a variety from all over the world. The Botanic Gardens are part of  Hagley Park which covers 165 ha of land in the downtown area and in 1855 a law was passed which said that the land should be reserved forever as public park and should be open for the recreation and enjoyment of the public. What an amazing gift to this city!

At the time the gardens became a place where people had a chance to meet, since then they had no phones, FaceTime or Skype. They would go there and spend time, talk or play games. Enoch Barker came to Christchurch as government gardener and in 1863, he planted the first tree in the Government Domain. Known as the Albert Edward oak, it was planted to mark the marriage of the Prince of Wales, later King Edward VII, to Princess Alexandra of Denmark. He also took care of developing the Gardens and their variety of plants and trees.

We loved our tour because the ride was fun for the kids and the guide was extremely knowledgeable and passionate about the gardens, so he was able to keep our kids interested for the whole hour! Once the tour is over you can enjoy walking around the gardens, maybe let your kids free to run around or go to the playground at the park next door!

In case you want to take the tour check out the page here.

5. Enjoy the view of Christchurch by taking a Gondola ride

Of course we could not miss seeing Christchurch from a higher perspective! The gondola base is in Heathcote Valley and it traverses the slopes of Mount Cavendish in the Port Hills. From the top you can enjoy 360 view of the city. To the west Christchurch cityscape, over Canterbury Plains to high peaks of the Southern Alps. To the south and east the view of the Banks Peninsula, Lake Ellesmere and Lyttelton Harbor and to the north the beaches of Pegasus Bay and the Pacific Ocean. Truly stunning! We went up as soon as it opened in the morning, so we could enjoy a lovely breakfast with a view!

Once you have checked out every inch of the panorama you can take one of the walking tracks. We only did a short one, because Luca was in no mood for walking, but honestly it was just so beautiful to be out there that it was ok also if we didn’t venture off too far. Another nice attraction while you are up there, is the Time Tunnel Experience, this ride makes you journey back 12 million years from the depth of a volcano, a forest, a short voyage on a ship and through the early settlements of Christchurch. This was extremely interesting for our kids to have a bit more of an insight on New Zealands’s past. Specially since we had just got here!

For more information on packages and prices click here.

6. Learn more about New Zealand culture at the Canterbury Museum

We walked in the museum a bit by mistake since there was a photography show going on and we found out that it was all free!

The museum is in a neo-gothic historical building. Throughout the museum you get to learn more about New Zealand’s rich cultural and natural heritage. Particularly interesting are the Maori and early European exhibits. Our kids loved the representation of a Christchurch Street in “the old days”, it felt like going way back in time. Particularly fun for them was trying to ride the bike with the huge wheel!

There was plenty to see and lots to learn!

7. Let your kids energy free at the coolest playground in town! Yes! We are those parents whose kids have to absolutely try every playground they see. But let me tell you something about this one in particular: you cannot miss it!

The Margaret Mahy Playground is fun for the adults as well. Mass and I went down the huge slide more than once!

The one downfall is that it is really complicated to take them away! 8. Walk around and see how the earthquake changed this city Although not as powerful as the 2010 one, this earthquake occurred on a shallow fault line that was close to the city, so the shaking was particularly destructive.

The earthquake brought down many buildings damaged in the previous one, especially older brick and mortar buildings. Heritage buildings suffered heavy damage, including the Provincial Council Chambers, Lyttelton’s Timeball Station, the Anglican Christchurch Cathedral and the Catholic Cathedral of the Blessed Sacrament. More than half of the buildings in the central business district have since been demolished, including the city’s tallest building, the Hotel Grand Chancellor. Today you can still some buildings left in the same conditions as when the earthquake happened, mostly for lack of funds or lack of ideas on what to do with it!

As we listened to the various guides talking about this we realized how these events have been painful for this city and the ruins make it impossible to forget, although I don’t really think anyone wants too. An earthquake that can do all this damage reminds you how powerful nature is and in front of such a calamity there is not much you can do.